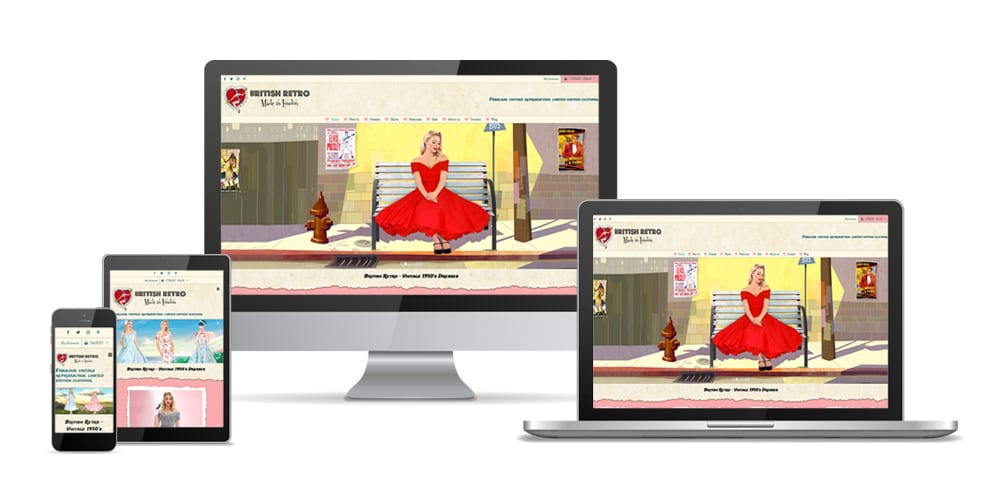 British Retro specialise in producing fabulous, 1950’s vintage reproduction clothing. Their cloths are made in the UK and are sold to customers all over the world. Initially we were contacted about taking on the hosting, maintenance and SEO services for their site, after having done that for over a year we were then commissioned to produce a new updated site for them. Working with British Retro we created a look that truly reflects their style and shows off their product range well. As with the previous site this was built on the WordPress platform, using WooCommerce for the eCommerce element.

Features of the site were larger images to show off the products better, clear size charts and a currency selector. The new site also had to perform better on tablets and mobile devices as this was were most of their customer traffic was coming from.

There is also a version of the site specifically for the US customer base.

Items produced for this client were:

If you have a similar project in mind that you would like to discuss, please get in touch.

“My colleague and I were just discussing how brilliant you are to work with and how our company now has a solid brand all thanks to the work you do!”

“Perfect! Thanks so much, always so easy working with you to get the results I want ☺”

“I have been working with Neil for over 2 years – he is professional, polite, efficient and very good at what he does and isn’t afraid of giving an honest opinion. Neil will always go the extra mile to ensure that a project meets its deadline without compromising on the quality of the output.”

“Neil Phillips is a designer who listens, takes on your ideas and makes them work within the constraints of design technology.  A rare breed in that he gets to know your business meaning he can also ‘thinks’ for you rather than just putting assets on “paper” without thinking about the meaning and content. He has been GTG’s designer for many years and his level of service and creativity has never failed.”

“Working with Neil is like having our own in-house designer.”

This website uses cookies and third party services to give you the best experience. Agree by clicking the 'OK' button or select your Settings Ok
Go to Top